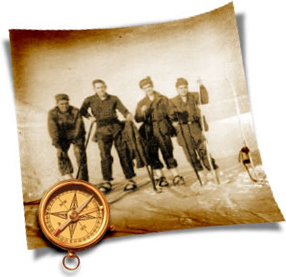 No trace is kept of permanent native settlements but instead, of temporary indigenous populations who climbed in search for the flocks of guanacos. There are tracks of Inca cultures that worshipped Mt. Aconcagua, thus burying their noble people near its summit. Such Indian cemeteries were studied by archaeologists who analyzed the mummies, which happened to be very well preserved due to climate conditions. The current uses of the reserve are focussed on the fact that the Mt. Aconcagua is the highest peak in the western world, thus attracting mountaineers and tourists from all over the world.

The expedition that brought about the discovery of Mt. Aconcagua Indian cemetery was made up of Gabriel Cabrera, the Pierobon brothers- Fernando and Juan Carlos- and the Pizzolon brothers- Franco and Alberto. Such expedition was one of the four which, early in 1985 headed for Mt. Aconcagua from different places for the sake of commemorating the 50th. Anniversary of the Mendoza Mountain Climber Club. Fifteen days after the finding, on about January 23rd., 1985, off set the discoverers along with three members of the Archaeology Institute, namely: J. Ferrari, Eduardo Guercio and Víctor Durán, journalist Germán Bustos Herrera, mountain climber Ms. Silvia Centeleghe and archaeologist Juan Schobinger who was the expedition chief.

On January 28, after overcoming a thick wall , they finally reached the place of the finding. It is the above-mentioned ridge which, according to the altimeter, is 5,300m high. Such dividing line is the beginning of the triangular shaped wing wall called the “Pyramid”. Some 50 meters further there starts a high thick wall that must have posed an unsurmountable obstacle for the indigenous people, should they have tried to climb on that way.

During two days they worked in the site, which was carefully surveyed and explored. They found two thick semicircular dry stoned-walls, almost demolished, and circle of stones which was one meter in diameter. Sheltered by one of the dry stone walls there was a funeral bundle containing the tightly folded body of an about 7 year-old child. The same was half-buried due to part of the displacement of the earth. It was wrapped up by several textile pieces: the most outward piece was a cloak fully decorated with yellow feathers, very likely, parrot feathers.

What at first the mountain climbers regarded as “grass”, happened to be a bundle of yellow and black feathers that used to belong to a tuft. The skull showed an erosion-caused fracture since it had been out in the open. The brain, in turn, had gone to pieces due to dehydration.

After working for several hours, the bundle was carefully removed from the hard “permafrost” ( frozen soil ) it was placed in, and while J. Ferrari, the laboratory expert ,dealt with its packing and further preparation intended for the descent, another team devoted their efforts to the excavation, trying to reach the stone wall sideways. Shortly after, they were fortunate enough to find in the same stuffing where the mummy had been placed- six magnificent Inca-style statues. Three of them are human male figures, in their undamaged clothes and plumage, whose heights ( without the dressing ) amount to : namely : the first one, which is gold-plated, 59mm; the second one , silver and copper-alloyed, 52mm and the third one, made of Spondylus, that is a valve which is typical of the Pacific Ocean , 47mm.

The others were three small and slim llama figures: one of them was gold-plated while the other two were made of Spondylus – a material which was very dear to the Incas and which they called mullu – bearing a red streak on one side and a while one on the other. This ¨ dowry ¨ undoubtedly holds a token importance along with a direct connection with other high- mountain archaeological fields which have also rendered this type of statues. Both the extraction and the preliminary analysis of such an unexpected finding account for the crowning moment in their expedition.

Upon finishing the excavation of the funeral bundle, a pair of woven fibre sandals along with two small fibre bags were found. One of them held vegetable elements which, according to a later analysis carried out by botanist Fidel Roig, happened to be an unusual type of bean which had been cooked. ( It thus became quite obvious that it was a token food intended for the Great Beyond journey ).

Once the extraction of the small statues and the careful packing of the mummy were over, they had to hasten their way down due to bad weather conditions. The descent along the glacier took place in the middle of a snow storm

Fortunately, and thanks to the mountain climbers´ expertise, they successfully reached the base camp. The rest of the return journey posed no problems, and they arrived in Mendoza City on January 31st. The funeral bundle was placed in a cooling chamber given by the LARLAC , run by Dr. Deis. Furthermore, one of his offices was laid at their disposal for later works.

The first attempt on Aconcagua by a European was made in 1883 by a party led by the German geologist and explorer Paul Güssfeldt. Bribing porters with the story that there was treasure on the mountain, he approached the mountain via the Rio Volcan, making two attempts on the peak by the north-west ridge and reaching an altitude of 6,500 metres (21,300 ft). The route that he prospected is now the normal route up the mountain.

The first recorded ascent was in 1883 by a German scientist : Paul Gusselldt, he reached Nido de Condores and kept on climbing up to 6.500m. But because of bad weather and really poor equipment (no tents, no camping gears, little food) he had to backtrack. He accomplish a 31-hour-journey ! In 1897 on a British expedition led by Edward Fitzgerald, the summit was reached by the Swiss guide Matthias Zurbriggen on January 14 and by two other expedition members a month later.

In 1940 the first women to reach the summit is the French, Adriana Bance.

The youngest person to reach the summit of Aconcagua was Jordan Romero of Big Bear Lake, California. He was 11 years old when he reached the summit on December 30, 2007.

And many climbers have broken records on the Aconcagua, opening new routes and variants, doing solo ascent, one-day ascent, etc…

Since my early days, while we where having tee time, I saw my father coming on Sundays home from the mountains with his old back pack, ice axe, crampons and rope which we immediately start using it as our toys. His face was always brown because the sun burn. We did always help him to clean his great yellow small tent, tipi style and also clean his benzine stoves. I lately understood that those journey my pa was training around local mountains in the Valparaiso region getting prepare for what was by the time a great local challenge; to climb Aconcagua in March 1954, the highest Andes peak, a great challenge for locals living in the pacific ocean side of the Andes. He also climbed successfully Juncal, Yeguas Heladas & Tolosa all peaks near the Aconcagua massif….

Since that time I am connect with all the heights around the backyards of our home. My family house had plenty of mountain book, from the Andes, the Himalayas, the Karakorum, Europe, etc. and other peaks on this earth, since than I hear my father good and bad mountain story, like altitude sickness, good friend dying on altitude, since than I got connected with a familiar issue: the mountain and since than I been growing, experience and working in and around the heights of the Andes…

Gabriel and Mariana were really fantastic and helpful, especially since I struggled with acclimatization. Suzanne (at base camp) was also really great. When I descended early she looked after me to ensure that all of my logistics for leaving the park were coordinated. The trip was overall well organized, very informative, very realistic expectations and a great experience – unfortunately, my body did not hold up as well as usual, but I do not feel that I (or the company) could have done anything differently to improve my chances. A great climbing team!

The memories I have of our trekking on Aconcagua is one of my fondest. It was a most fantastic experience…. one which I will treasure for the rest of my life. Thank you and your team members for making it possible. I very much enjoyed the personal one-on-one relationships we developed with you and your team. Your professionalism and desire to please the customer is very evident and commendable.

Aconcagua Express & KL Adventure was truly a wonderful experience. From the pre- trip client care to the world class guide and staff, fabulous base camp cuisine, traveling safely and ethically, superior route experience and better pricing than most other outfits. Truly a fantastic trip that I have no reservations in recommending to Americans or anyone else interested in a climb.

Hi Joaquin, I was a member of your January expedition to Aconcagua, I was very impressed with the entire setup and I would like to compliment you on how smoothly the expedition went. I was very impressed with the skills of both Gabriel and Mariana and if it hadn’t been for them and the decisions they made I am quite sure we would not have made the summit.

Dear Joaquin,
Thank you for everything and making our trip to Aconcagua 100% successful! The entire team reached the summit via the False Polish route the 12th of February. Your services and staff helped make the expedition a better experience for our team. Carolina and Marcelo were great! 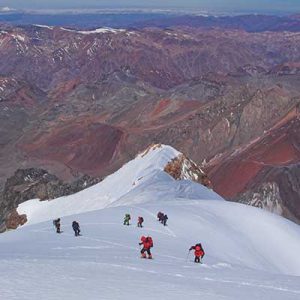